A History of The Fort

In 1939 the Army had requisitioned the farm at the top of Grange Lane which then occupied the land between the Golf Course and Cox's Walk, in order to establish a Gun and Searchlight Battery to protect London during the Blitz. The views over London were as they are today appropriately panoramic.

In 1960 the land was returned to the Dulwich Estate with the gun emplacements still to clear and a host of temporary buildings in various states of dilapidation. 1961 Bill Hall the then Scout Master of the 3rd Dulwich College Scout Group was offered use of the de-requisitioned Gun-sight as a Group Headquarters. The Estates Manger showed the Leaders around the site and asked what they wanted. They tried to restrain their ambitions as surely the Mess Building was more than they could hope to use or maintain? But they chose a range of three buildings which had included the Officers' Mess and the WRAC building which appeared to be in relatively sound condition, and then said yes also to the lorry-garage which would accommodate the Group Stores, and marked off an area of land in front of them. The rest of the site would be cleared and laid out as allotments, and one building between ours and the Golf Club was reserved for the allotment-holders 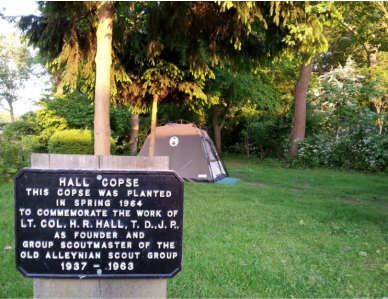 Bill Hall with a stroke of imaginative romanticism named the site "The Fort" to commemorate its war-time use. The Scouts' enthusiasm was caught. They marked out their boundaries with massive posts "cannibalised" from the Gun-site, and set to work painting and refurbishing the buildings. Boys stayed in the buildings or camped for week-ends, but some work had to be done professionally. The increased size of the Group brought in new parents who gave their support both financial and physical. They even got a subscription from P. G. Wodehouse. In 1962 the Fort was officially opened by Sir Charles McLean, the Chief Scout of United Kingdom, as the Old Alleynian Group's Headquarters.

Although the buildings were fit for use to provide separate club-rooms for each of the four units of the Group, major reconstruction of the Mess was financed by a grant from the Charitable Trust of Tom Ismay, whose father had been the Chairman of the White Star who escaped when their flagship, the Titanic, sank on its maiden voyage.

The Group shared its good fortune with other scouts and welcomed scouts from the UK and abroad to use the premises and an extra piece of land between our original boundary and the allotments which the Estate added to the lease. The Allotment Holders decided to set-up their premises amidst the allotments, and the building reserved for them became available for a Service Crew from the local Scout Districts.

In 1967 the College abolished Saturday School, and it was no longer practical to have Scout meetings on that day. The 48th Camberwell Scout Group was closed and the Scout County took over the Fort.

In 2007/8 some 5,000 Scouts from at least 28 different countries made use of its facilities, with the easy access through the Woods to Sydenham Hill Station. Training courses have been held for both adults and Scouts, and the facilities have attracted other youth training organisations, such as Operation Raleigh International and the Woodcraft Folk..

Today, The Fort continues to be well used not only by Scouts but also by a wider community. The Ismay Room has been completely rebuilt and improvements made to continue the life of the other original "temporary" buildings. There is accommodation for 100 in three separate buildings, each with its own kitchen and washing facilities, to say nothing of the ample camping space.

Early Scouting at The Fort by Michael Rich

In September 1945, immediately after the War, I went to Dulwich College and joined the Scouts. The Scout Troop which I joined was the 3rd Dulwich College which had been founded in 1937 by "Skip" Hall shortly after he had left the College. Its peculiarity was that it was to be led by Old Alleynians in contrast to the other School Troops which were led by masters at the College. During the war Bill Hall had kept in touch with the boys who in that period provided the leadership, although with supervision from Vickie Styler who had founded the first Scout Troops at the College.

When Lieutenant-Colonel H.R.Hall, as he had become, returned from the Army, I remember our head-quarters in an old pavilion in the "Tank Field", named after the war-time Emergency Water Tanks. We had added some lean-to sheds as "patrol dens" and hoisted our flag from the old oak tree. But almost at once Hall negotiated the use of a larger disused building, by the Covered Courts on the College grounds. This the Scouts improved and redecorated, and was duly opened in 1949 by Brigadier Lorne Campbell VC, who became the Troop's Patron.

Fifteen years later there were two Scout Troops with room for 50 boys, and a waiting list, a Senior Scout Troop of fourteen 15 to 18 year olds, which, by that time I led, and a Rover Crew of 19 Old Alleynians. The troops met after Games on a Saturday, when it was possible to get Old Alleynians who were at work on the Tuesday afternoons when the School Troops met, to lead what became "the 48th Camberwell, Old Alleynian Scout Group, Lorne Campbell's Own". Thus, although the Scouts were all from the College, the Group was no longer part of it. Redevelopment plans led the College to wish to recover the site by the Covered Courts which we were occupying. Every alternative site which we proposed, which appeared acceptable to the Estates Governors, was also earmarked for some further school development.