We hope that everyone who comes into contact with Scouting will have a positive experience. However, it is inevitable that on occasions, concerns may arise which require investigation. 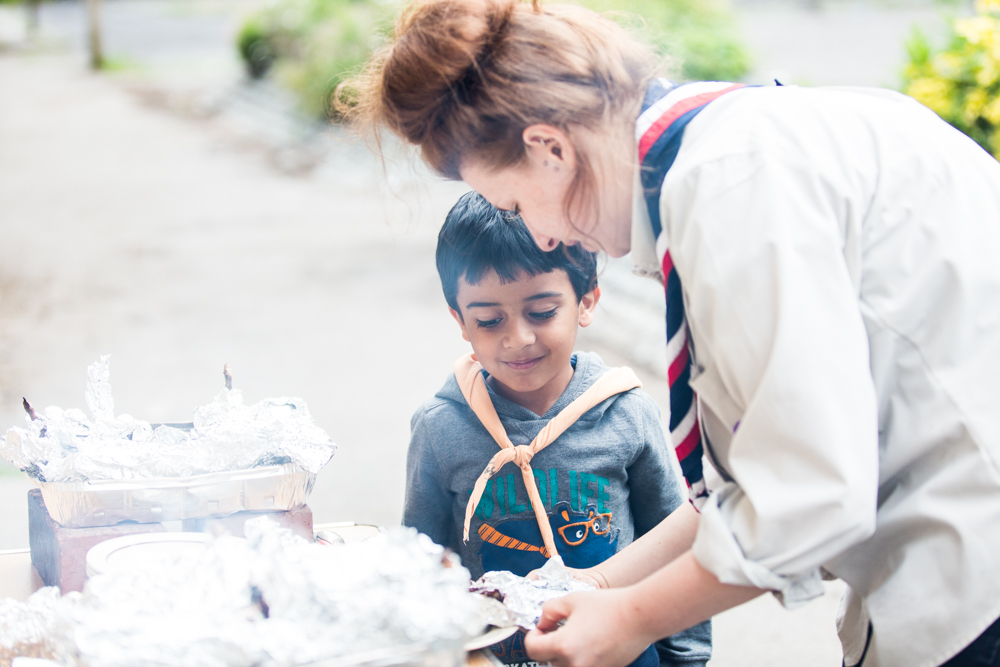 As the majority of Scouting activity takes place locally within our community it is expected that most of these concerns will be dealt with quickly and courteously in an informal way by our local volunteer managers and leaders. However, it is possible that a complaint may arise that requires a more formal investigation and response. In these situations we are committed to seeking to resolve these complaints fairly and in the best interests of everyone involved.

As background to the consideration of your complaint, you will find it helpful to understand something of the purpose and method of scouting, which are summarised here.

The purpose of scouting
Scouting exists to actively engage and support young people in their personal development, empowering them to make a positive contribution to society.

The Scout method
The Scout method provides an enjoyable and attractive scheme of progressive training, based on the Scout Promise and Law, guided by adult volunteer Leaders. In practice the method is best seen when young people, in partnership with adults, are:

The Scouts recognises its responsibility to deal fairly, constructively and consistently with expressions of concern or dissatisfaction from members and non-members including parents and carers on behalf of themselves or their children in line with its values.

As Scouts we are guided by the values of Integrity, Respect, Care, Belief and Co-operation. When applying this policy these values should be at the forefront of every interaction and decision that is made, and all involved should be regularly reminded of them.

Please understand that all Leaders and Commissioners are volunteers and undertake their scouting roles in their spare time. It may take time for them to give you a substantive reply to your complaint.

Scouting is provided through Beaver Scout Colonies (6-8 yrs); Cub Scout Packs (8-10½ yrs); and Scout Troops (10½-14 yrs). These Scout Sections are organised into Scout Groups based in a local community and lead by a volunteer ‘manager’ - the Group Scout Leader. In the absence of a Group Scout Leader one of the other Leaders will be designated as the Acting Group Scout Leader.

A number of Scout Groups in a defined geographical area form a Scout District led by a volunteer District Commissioner. Provision for Explorer Scouts (14-18 yrs) and Scout Network (18-25 yrs) is also organised by the District.

Policies of The Scout Association

The Religious Policy
The Scout Movement includes Members of many different faiths and religions as well as those with no formal religion. The following policy has received the approval of the heads of the leading religious bodies in the United Kingdom.

All Members of the Movement are encouraged to:

Attendance at services
If a Scout Group, Explorer Scout Unit or Scout Network is composed of members of several denominations, religions or beliefs, the young people should be encouraged to attend services relevant to their own form of religion or belief.

Equal Opportunities Policy
Young People
The Scout Association is part of a worldwide educational youth movement. The values, which underpin and inspire its work are embodied in the Scout Promise and Law and in the Purpose of the Association.

Within this framework, the Association is committed to equality of opportunity for all young people.

Accordingly:
The Scout Association is committed to extending Scouting, its Purpose and Method to young people in all parts of society.

No young person should receive less favourable treatment on the basis of, nor suffer disadvantage by reason of:

Leaders and other volunteers
To carry out its work the Association seeks to appoint effective and appropriate Leaders, and to involve other volunteers in supporting roles, all of whom are required to accept fully the responsibilities of their commitment.

The overriding considerations in making all appointments in Scouting shall be the safety and security of young people, and their continued development in accordance with the Purpose and Values of the Association.

Accordingly, all those whom the Movement accepts as volunteers must be appropriate persons to undertake the duties of the particular position to which they have been appointed (including, if relevant, meeting the requirements of the Sponsoring Authority) and, where appropriate, the responsibilities of membership.

The physical and mental ability of a particular potential appointee to fulfil a particular role will always be a relevant factor to consider.

Within these constraints, and those imposed by the need to ensure:

no person volunteering their services should receive less favourable treatment on the basis of, nor suffer disadvantage by reason of:

Note: Paedophilia is a bar to any involvement in the Scout Movement.

Safety Policy
It is the policy of The Scout Association to provide scouting in a safe manner without risk to health, so far as is reasonably practicable.

The Association believes that this responsibility ranks equally with the other responsibilities incumbent upon those providing Scouting activities and functions.

It is the responsibility of all those involved in Scouting to seek, so far as is reasonably practicable, to ensure that:

Accordingly The Scout Association is committed to:

As part of the vetting arrangements, The Scout Association will undertake a Personal Enquiry which involves a check made against records at Headquarters for all adult volunteers and for certain roles a Criminal Record Disclosure Check. For foreign nationals or British Overseas Territory citizens operating abroad in British Scouting Overseas and Overseas Branches, checks must be made according to arrangements authorised by the Head of Safeguarding at Headquarters.

Child Protection Policy
It is the policy of The Scout Association to safeguard the welfare of all Members by protecting them from neglect and from physical, sexual and emotional harm.

Accordingly The Scout Association is committed to:

Anti-Bullying Policy
“Children have the right to protection from all forms of violence (physical or mental). They must be kept safe from harm and they must be given proper care by those looking after them.” [The United Nations Convention on the Rights of the Child, Article 19]

The Scout Association is committed to this ethos and seeks to ensure, as far as is reasonably practicable, the prevention of all forms of bullying among Members. To this end all Scouting activities should have in place rigorous anti-bullying strategies.

Development policy
Subject to the our rules governing age ranges and mixed membership the Scout Movement is open to all young people of whatever background.

The Scout Association recognises, however, that access to Scouting is not equally available to all groups and communities across society as a whole.

South London Scouts
Our County Development Service support scouting across our Scout Districts which cover the London Boroughs of Wandsworth, Lambeth, Southwark, Lewisham and Royal Greenwich in promoting scouting, supporting the recruitment of adult volunteers, providing support to adults to helping them deliver quality scouting which is available to all young people in our communities.

Nationally
The Operations sub-Committee of the Trustee Board and the Regional Development Service at Headquarters support the Movement in its work in making Scouting available to all.

In particular, through the use of innovation and experiment, it supports local Scouting in meeting the needs of young people in areas of urban disadvantage or priority, in highly rural areas, and among the minority ethnic communities. It also works in collaboration with other agencies to support those disadvantaged young people who might benefit from its programme and ethos, and who may never become full Members of the Movement.

How do I make a complaint?

If your complaint is about a matter within one of our local Scout Groups please contact the Group Scout Leader. The Group Scout Leader is the manager of scouting activities within the Scout Group. They will listen to the complaint and will do their best to answer your concerns. If you feel you do not want to discuss the matter with the Group Scout Leader, or if they cannot deal with your concerns, or if your query is more serious, then please contact your District Commissioner who will assist you. You can find out who your District Commissioner is by looking at the ‘our people’ section of this website.

They will acknowledge receipt of any formal complaints within seven days and will past your concerns on to our appropriate Group Manager for investigation. Our aim is to resolve all complaints within four weeks. However, this may take longer depending on the nature of the complaint. If the timescale needs to be extended, you should expect to be kept informed of progress.

We have a few basic rules for the acceptance of complaints:

How will my complaint be dealt with?
Your complaint will be dealt with fairly and objectively. We handle complaints in a positive and pro-active manner and expect resolutions and outcomes to contribute to a process of continuous improvement.

Please bear in mind that adults in scouting are volunteers and have other calls on their time. It may therefore take a little longer to sort out your complaint, however you will be kept informed of the progress of the complaint.

The investigator may need to speak to you and a number of other people to fully understand your complaint and the circumstances surrounding it.

The manager will make a decision about the complaint and will inform you whether your complaint is upheld or not and the actions that will be taken as a result.

A conflict of interest is when someone’s judgement or actions are, or could be, affected by something unconnected with their role in scouting. This includes any circumstances that affect, or could be seen to affect, someone’s independence or impartiality.

If a volunteer manager from the management level above is an ‘acting’ volunteer manager where a complaint is to be managed, then whenever possible they shouldn’t manage the complaint so as not to create a conflict of interest if an appeal is needed.

The offices of the Patron, President, and Chief Scout do not deal with complaints, disagreements or disputes. Any correspondence received on these matters by UK headquarters will be referred to the most appropriate and most local manager.

There is no process of ‘escalation’ of a complaint. The complainant’s recourse is solely to a single appeal once the original complaint has been investigated and the outcome known as set out in this policy.

Complaints in relation to our paid staff and matters relating to South London Scout County will be handled by the relevant line manager in accordance with this policy and/or relevant employee policies.

Complaints about employees of any companies or services used by local scouting should be dealt with in the most appropriate and most local level of scouting in accordance with their relevant engagement policies.

Any appeal must be received within 14 days of the complainant, or those directly affected, being notified of the outcome of the original complaint.

The Whistleblowing policy is for all volunteers who have a serious concern in regards to a breach of our standards or conduct. This policy makes sure that if a volunteer has a serious concern, they know how to raise it as soon as possible. The matter will be comprehensively investigated and the appropriate action taken.

We hope you find this information valuable. If you require clarification or require advice on how to make a complaint, please contact us at concerns@southlondonscouts.org.uk or complete the form below.